The major deities of a civilization often say quite a bit about how that civilization works. How the god is worshipped and why the people respond to that god is often as important as the stories of the god itself. At the heart of the religion of the Mexica and the Aztec empire lie Huitzilopochtli, a god of the sun and warfare that had a major impact on the daily lives of those who lived in the empire.

Though Huitzilopochtli was a god of war and battle, he didn’t always spend his time in forms that modern people would consider to be warlike. In fact, one of his most common forms was that of a hummingbird.

Huitzilopochtli had quite a few different symbols. One of the major symbols with which he was associated with in both his bird and human forms was the hummingbird. He was also closely associated with the sun, especially in his aspect as the warrior who fought against the darkness. Perhaps his most important symbol, though, was the capital city of Tenochtitlan.

It should also be noted that Huitzilopochtli was a god of the afterlife as well. If Aztec soldiers were killed in battle or women died in childbirth, they were said to join Huitzilopochtli. Though he was not a death god, he did still have command of those souls that fell in those specific circumstances and they would serve in his palace.

Huitzilopochtli actually has a fairly wide-ranging family in Aztec myth, though figuring out exactly to whom he is related requires reading specific stories. There are two separate myths about Huitzilopochtli’s creation, each of which gives him a mutually-exclusive family group.

In the first story, Huitzilopochtli is the son of Tonacatecutli and Tonacacihuatl, the universal creators. According to this myth, his brothers are two gods called Tezcatlipocas as well as Quetzalcoatl.

In a different myth cycle, he is the son of the goddess Coatlicue. This myth cycled gives him four hundred brothers, the Centzonuitznaua, as well as a sister called Coyolxauhqui. Regardless of the myth cycle, Huitzilopochtli seems to have no children.

Huitzilopochtli actually has a fairly odd place in the mythology of the Mesoamerican world. He is worshipped as one of the primary deities of the Aztec empire and he is the chief god of the Mexica people, but he’s also one of the very few gods worshipped in the region who doesn’t seem to have counterparts that stretch back through multiple civilizations.

This is unusual because Huitzilopochtli’s stature puts him on par with several other gods that can be traced at least back to the Maya, if not all the way back to the Olmec. Whether this means that Huitzilopochtli was god strictly worshipped by the Mexica or that he has further connections that have yet to be discovered is still a point of contention.

What is perhaps more important is that the stature of this god meant that he was seen as more than just a god of one aspect of nature. He was responsible for the success and failure of the Mexica, and thus of the Aztec Empire. It is hard to overstate how important he was to his worshippers at his height.

Huitzilopochtli was the primary god of Tenochtitlán, the heart of the Aztec Empire. It was here that he was worshipped along with Tlaloc atop the Temple Mayor and here that he was the recipient of bloody human sacrifices.

The southern side of the Temple Mayor had steps painted red to represent sacrificial blood, an apt color considered some of the primary methods of worship that Huitzilopochtli received. The sacrifices to Huitzilopochtli were primarily war captives, and they were beheaded and skinned in honor of the god. In fact, Huitzilopochtli’s priests would also eat parts of the sacrificial victims in order to become closer to the god.

Not all of Huitzilopochtli’s worship was bloody, though. In some ceremonies, quail eggs would be sacrificed to the god, his image would be decorated with garlands, and women would dance traditional dances. There was even a celebration in which an effigy of the god would be made out of dough and people would each eat a piece of Huitzilopochtli. 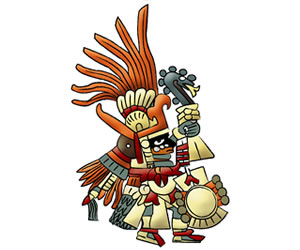