Horus is the Egyptian god of the sky. He is perhaps the oldest and most recognizable of the ancient Egyptian gods. He is often portrayed as a falcon or as a human with a falcon head. With his ability to look out over the kingdom from the sky, Horus was viewed as a protector of the people of Egypt, particularly the pharaohs and rulers.

Horus was the first known national god in Nekhen, city of the falcon and religious and political capital of Upper Egypt at the end of the Prehistoric Period. Many falcon gods existed in Egypt over the next millennia. A great number of them were assimilated to him.

The falcon god became known as Haroeris or Horus the Elder over time. In this form he was often associated with Hathor, the ancient cow-goddess, sometimes as son and sometimes as mother.

It was believed that the reigning king or pharaoh was a manifestation of Horus. Every king also had a Horus name that identified him with the god.

Horus was most often depicted as either a falcon or a human with the head of a falcon. These depictions could be in the form of statues, engravings or paintings. Horus’s right eye symbolized the sun or morning star and was therefore associated with the sun god Ra, while his left eye symbolized the moon.

There are a number of examples of him being portrayed as a falcon, such as this statue at the Temple of Horus at Edfu. Here, the falcon is wearing a double crown called a pschent. 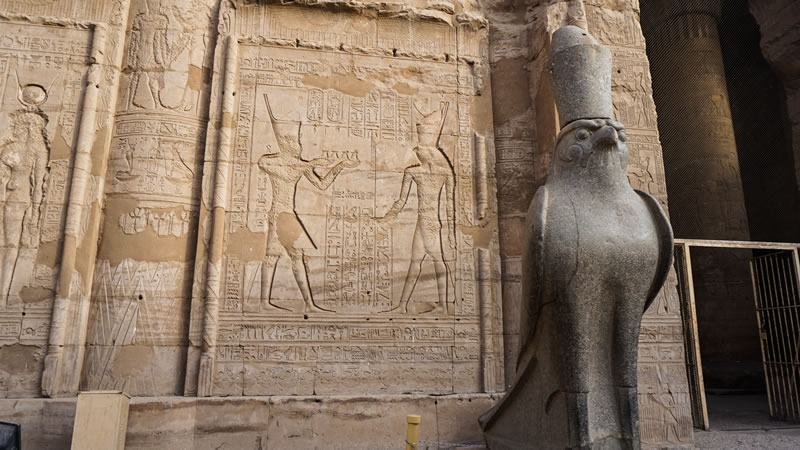 When he was portrayed as a human with a falcon head, he was often wearing clothing similar to that of the pharaohs. Sometimes he was pictured wearing the pschent. In other instances he was depicted wearing a Nemes headdress, like the one on the statue in the picture below. Horus is also often shown wearing a broad collar called a wesekh. 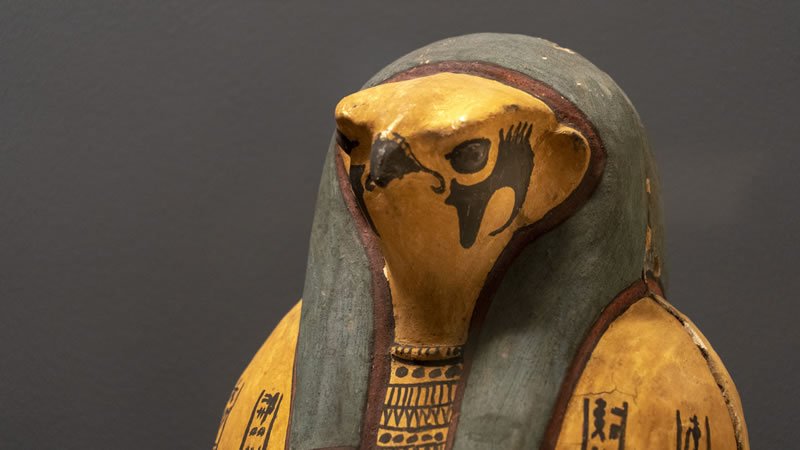 The many aspects of Horus make him a complicated deity with an intricate mythology, passed on in a multitude of ancient texts such as the early Pyramid Texts. In the myth of Osiris, Horus is the son of Osiris and Isis as well as the mythical heir to Egypt’s kingship. During this time, the living king was seen as a manifestation of Horus in life and of Osiris in death.

Horus is the brother of the god Anubis.

Horus the Elder battled his uncle Set (brother of Osiris) for 80 years after Set murdered Osiris. Set wanted the Egyptian throne for himself but was eventually defeated by Horus. According to myth, Horus’ left eye was damaged in one of the battles, explaining the different phases of the moon. The eye was, however, restored by the god Thoth.

The falcon, along with the Eye of Horus, are the two main symbols affiliated with the god.

The Eye of Horus is a symbol of protection and power, and is personified in the goddess Wadjet, another early Egyptian deity. It appeared in funerary amulets, protecting pharaohs in the afterlife. Seven such bracelets were found on the mummy of Shoshen II.

As creator and god of the sky, Horus was known as the protector of the pharaoh.

Horus was also believed to be a god of war and hunting. The prehistoric Hunters Palette or Lion Hunt Palette, an ancient Egyptian cosmetic palette showing a lion hunt, includes images of a falcon-headed man believed to be Horus.

He was worshiped over a period of approximately three thousand years, from prehistoric Egypt (before 3100 BC) until the time of the Roman Empire.

The temple of Edfu in Upper Egypt was dedicated to Horus. It is one of the best-preserved temples in Egypt today. 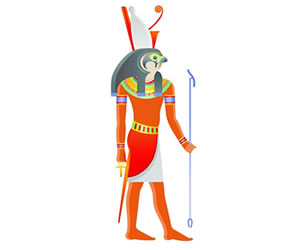