Chac is easily distinguishable by his hooked nose and fangs. As the Mayan god of Rain, he was very important to the Mayans.

Itzamna was one of the chief sky gods of Mayan mythology. He could take the form of a bird or caiman, and was responsible for the Mayan calendar.

Ix Chel is known as the Mayan goddess of the Moon. She was also a goddess of fertility, waters and sometimes even war.

Kukulkan is the Mayan snake god. Kukulkan would bring energy and knowledge to the Mayan people twice a year, and was also in part a creator deity.

Yum Kaax is the Mayan god and protector of wildlife and the hunt. He was associated with the life cycle as well as giving protection to hunters during their hunts. 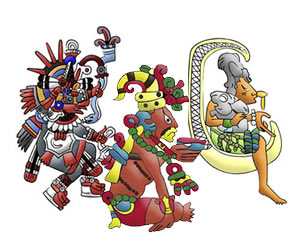