One common factor linking many mythological pantheons is the presence of a chief sky god. There are many such gods in the Mayan pantheon, but one of the most famous is the god Itzamna. Taking on many different roles in the Mayan religion, he is a god deeply connected not only with acts of creation, but also with knowledge and healing.

Like many of the gods in the Mayan pantheon, Itzamna has multiple different aspects. When presenting himself as a human, he did so as an old man with a large nose, square eyes, and generally without teeth. He’s generally considered to have a pleasant demeanor that belied his status as one of the chief gods of the Mayan pantheon.

Another important form of Itzamna is that of the Bird of Heaven. This is a large bird that bears the words for day and night on its wings and that has a head like a falcon. This bird often has a two-headed snake in its mouth.

Another of his forms is that of a two-headed caiman. In this form, he represents the duality of the universe as conceptualized by the Maya. His final form is the form he assumes in the underworld – that of a skeletal crocodile.

In addition to his mythical representations, he was also represented in the Mayan religion by a priest who wore a headdress featuring the sacred bird deity. This was meant to be not only a representation of him, but a ceremonial version giving his blessing to a Mayan leader.

Itzamna was largely thought of as a creator deity – sometimes the prime creator deity of the Mayan pantheon, and sometimes the son of the primary creator god. As such, he was represented in a number of different ways, some of which fall under the greater auspices of general Mayan creator deities.

Some of the most common Itzamna imagery is related to his forms. Both the caiman and the sacred bird are considered visages of the deity, as are some two-headed serpents. Likewise, the bird deity headdress is considered a major part of his iconography.

Outside of his animal forms are several other images. The image of a primary god seated across from the lesser gods is generally associated with Itzamna, as is the Mayan classic hieroglyph for a ruler.

It’s entirely possible that the Sun is also a symbol that is connected to Itzamna, though there is some disagreement among scholars whether the Sun Deity Kinich Ahau is just another iteration of Itzamna or if he is an entirely different god. If he has the portfolio of the other god, one can and should consider sun-based imagery as symbolic of him.

As a primary creator deity, Itzamna has a number of different powers and abilities. In those legends in which he is considered the primary creator, he has power over the earth, the underworld, and the sky. He may or may not have also had some powers over the division of how various aspects of the land worked.

He is often considered to have significant powers when it came to medicine. He is usually thought of as the inventor of medicine, or at least the deity who brought medication to the people. He is the god most closely associated with both science and writing, but he’s also a god that has some clear associations with disease.

Importantly, Itzamna also has some connection to the Mayan world trees. His precise role is unclear, but he is generally pictured in his aspect of the bird as being a creature who dwells either on or within these sacred world trees.

Like so many other Mayan gods, Itzamna’s precise relationship to the other gods is very hard to determine. Some of the deities discussed below may be alternate versions of him, his children, or even his parents. What’s known, though, is that he is closely related to them in some way.

In some tales, he is married to the elderly aspect of Ix Chel. In these stories, he is the father of thirteen different sons, two of whom are responsible for the creation of the earth and of humans. The other eleven sons generally fade from myth fairly soon after their introductions.

In other stories, he is the father of Bacab, an important deity related to either the sky or the structure of the world – or, in some cases, four different deities that are responsible for holding up the sky.

Hachakyum may be a son, successor, or iteration of Itzamna. Hunab Ku is, at least in some versions of Mayan myth, either the father or the immediate predecessor of Itzamna.

Itzamna’s role as the deity responsible for writing and the calendar has led to him being a fairly important figure in the Mayan calendar. There are two separate months with special ceremonies related to him – one related to writing and the other related to medicine. In the cycle of Mayan years, one of those years is also supposed to be directly under the purview of him. 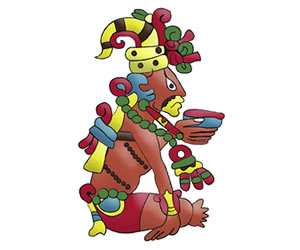