One of the most important Mesoamerican deities was the feathered snake deity. Worshipped by a number of different cultures dating all the way back to the Olmec, it represented the power of several empires. One of the ways through which this deity’s influence spread was through the cult of Kukulkan, the Mayan iteration of the feathered serpent. Though relatively little information is known about Kukulkan’s worshippers, there’s no doubt that the worship of the god helped to spread Mayan culture and ultimately worked as something of a bridge between the various societies of the pre-Columbian Mesoamerican world.

Kukulkan is most famously represented as a feathered serpent. A common motif in Mayan and later Aztec myth, the feathered serpent appears in a manner that’s a bit different depending on the precise location in which depictions are found. In some cases, the winged serpent is a creature that has a humanoid head. In other cases, it’s a more traditional serpent. There are even some older images of Kukulkan that look a great deal like a standard snake, though these images may be more closely related to a general snake deity than the one that would become Kukulkan.

It should also be noted that there are at least some stories in which Kukulkan has a humanoid form, though it’s unclear if this is meant to be the same god. In these folktales, the god Kukulkan appears as a Mayan warrior. These stories may or may not be related to those in which Kukulkan was born of human parents and had a human sister, only to be revealed as a feathered serpent later in his life. Regardless of the connection, the human form of Kukulkan is present in a few notable stories.

The main symbol of Kukulkan is the feathered serpent. This serpent generally is generally known as a vision serpent – not just a snake, but a sort of ur-snake in which many other types of snake can be seen. It is not uncommon to see the head of a Mayan warrior either replacing the serpent head of the feathered snake or coming out of the serpent’s mouth, a symbol of how Kukulkan was responsible for the power of the Maya. More generally speaking, earthquakes were also symbolic of the presence of Kukulkan, as was the clear earth after a rainstorm.

Due to his status as a feathered serpent, a commonly-assumed power of this god is flight. He may or may be able to fly to the sun, though Kukulkan is still hurt by its heat. Kukulkan is also large enough to sweep the earth clean – a reference to his relationship to the rains, though Kukulkan in this case is shown as a companion of a rain god rather than an actual rain god.

In some stories, Kukulkan also has the power to cause earthquakes. These tremors are not meant to be destructive, though – instead, they are meant to prove that he is still alive. In addition to his clearly stated powers, Kukulkan is also believed to have at least some degree of power over knowledge itself, as some sources claim that Kukulkan was the god who gave humans both laws and writing.

The complexity of Kukulkan also extends to his stature among the ancient Mayan gods. In some stories, he is a creator deity – not only of the Earth but of the failures that came before the modern world. In other stories, Kukulkan is the chief among all of the Mayan deities, taking on a role as a priest-king of the god. Exactly where he stands in the hierarchy of gods largely depends on the time period in which the workship was recorded as well as on the location of the city in which the records were found.

Other versions of Kukulkan place him simply as a sky deity among other sky deities. In fact, he is sometimes seen as subservient to either the sun or the rain deities. There are even stories in which Kukulkan was not originally a god at all, but rather a priest and king who was driven from his city by the god of night.

In the vast majority of cases, though, Kukulkan assumes a fairly prominent role. According to some very late records, he was not only the god who taught mankind about agriculture but who would also prophesize the end of the Mesoamerican civilizations.

While we don’t have many records about how Kukulkan was worshipped, we do have plenty of information to show where he was worshipped. The great step pyramid of Kukulkan at Chichen Itza not only bears his name, but also has many images of the god carved into it. It was very likely that this site was used as a place of worship for the god, possibly during ceremonies that depended upon the alignment of the stars and planets.

We do, however, know who worshipped Kukulkan. He was an incredibly important deity among both the political elite and the traders of the Maya. The priests of Kukulkan were some of the most powerful men in the city of Chichen Itza, and they seem to have been chosen from among the members of the city’s most powerful families. 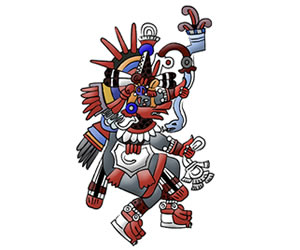