Yum Kaax is the Mayan god and protector of wildlife. A few examples of wildlife he oversees include forests, agriculture, animals and hunters. Many sources state that he is the same god as Ah Mun, while others say they are separate deities. If they are separate deities, Yum Kaax would lean towards being the protector of the forests and wildlife, and Ah Mun would lean towards being the god of maize, corn and agriculture.

Yum Kaax does not look entirely different from many other Mayan gods. He is often depicted as a human in a sitting position and wearing Mayan headdress and clothing. There are some unique features to this deity, however. In statues, paintings and engravings, he is usually shown as a young and beautiful person, which personifies the birth of the life cycle in plants and wildlife.

Yum Kaax was a kind deity and was not associated with fear or death. In fact, it is likely that he battled Mayan gods of death. He was associated with gratefulness and thankfulness.

The main symbol to be related to Yum Kaax would be an ear of corn, giving additional weight to the equivalence between him and Ah Mun.

While Yum Kaax was the protector of wildlife, he was also the protector of hunters. Before going on a hunt, hunters would say a prayer to Yum Kaax and ask him for permission and protection. Hunters who acted irresponsibly or were cruel while hunting would potentially invoke the wrath of the deity.

Yum Kaax was also associated with and protected by the Mayan god of rain, Chac. As rain is essential to the life cycle, the two deities would have been intrinsically linked in the Mayan pantheon.

The most well-known worship of this deity were the rituals and prayers that took place prior to hunts. 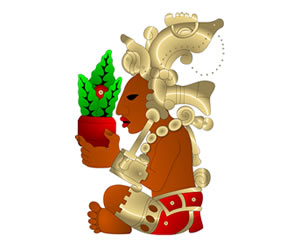