The mythology of Rome is somewhat more cosmopolitan than most might think, with influences gained from all across the Roman Empire. While some of its gods and goddesses almost certainly date back to its earliest days, others were imported either whole cloth or were mixed together with other Roman gods to create a sense that Rome’s gods were the gods of the world.

Like the gods of most other cultures, Rome’s pantheon evolves over time. The earliest gods and goddesses are more spirits than anything else, rulers of small domains and households. As the city and its surrounding kingdom developed, so too did its gods – soon, the immortal gods and goddesses would play important roles in every aspect of life, ruling realms both great and small while influencing the lives of all around them.

The greater Roman gods are remarkably human, something that almost certainly derives from both Rome’s foundational myths. Rome is a city built by demi-gods, after all, so it would stand to reason that her gods would likewise be able to walk among mortals. Though not so seemingly-human as those of nearby Greece at first, Rome’s gods will eventually become the sort that intermarries with humans, leave behind long lineages of noble descendants, and engage in the kind of vice and folly that leads to amazing stories.

Rome’s major pantheon is remarkably stable. Though it was certainly heavily influenced by that of Greece, the major gods keep their place throughout the centuries of Rome’s dominance. Gods like Jupiter, Apollo, and Janus hold their place even as new gods cycle in and out of fashion. There is a sense that while Rome is a cosmopolitan city that is more than open to outside influence, nothing will ever be quite so grand as the myths on which the city was initially founded.

With this said, Romans were remarkably open to worshipping multiple gods. They would honor the greater pantheon with feasts and celebrations, but they were every bit as observant when it came to honoring the gods of their households, their businesses, and their neighborhoods. Everything in the Roman world was divinely touched, and any new discovery would carry with it a touch of divinity.

Gods in Rome were also multi-faceted. A god would have many different guises, some of which might explain why that god or goddess was worshipped in one country under one name and another country under a different name. Gods and goddesses were more mutable in their exact roles than humans, but the adaptability of the gods allowed them to continue to be worshipped. In many ways, the ability of the gods to adapt was reflective of the ability of Rome itself to change over time.

Apollo was the Roman god of the Sun and agriculture. He is one of the most Hellenic Roman gods, as he shares the same name as his Greek counterpart.

Ceres was the goddess of grain. In Ancient Rome, there were three annual festivals for Ceres that were related to planting crops.

Diana is the Roman goddess of wild animals and the hunt. She may have originated as a local goddess, but later became affiliated with the Greek goddess Artemis.

Juno was known as the Roman protector of women and childbirth.

Jupiter was chief among Roman gods and goddesses. Like his counterpart Zeus in Greek mythology, he possesses the power of lightning and thunder.

Mars was the god of war. As Rome was an empire ultimately based on conquest and acquisition, Mars had a special place in Roman worship.

Mercury was similar to the Greek god Hermes, and is known as the messenger god. He several myths he delivers messages on behalf of Jupiter.

Minerva was the Roman goddess of knowledge and science. She was highly revered, and worshiped along with Jupiter and Juno as one of the Capitoline Triad.

Neptune was the Roman god of the sea, similar to the Greek god Poseidon. He is famous for his three pronged Trident, and was said to have caused a massive flood in one Roman myth.

Venus was the goddess of love, beauty. A number of temples were dedicated to her throughout the empire, some of which were used to practice sensual activities and licentiousness.

Venus was the Roman goddess of the home and hearth. Her sacred animal was the donkey, which was the animal used by bakers to turn mill stones in order to make flour.

Vulcan was the god of fire. He constructed tools and weapons for the other Roman deities, and the fires from his forge were said to be the force behind violent volcanic eruptions. 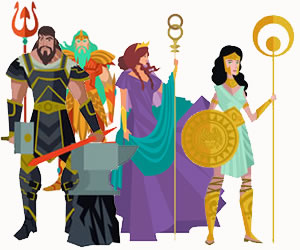