Anubis is the Egyptian god of the dead and the Underworld. As an embalmer, he is also associated with mummification and viewed as a protector of graves. He also guides souls into the afterlife. Anubis was popular across Ancient Egypt, with a number of cities, temples and shrines dedicated to him.

After the Old Kingdom, there were several revolts and wars between these different societies and dynasties. Around 2050 B.C.E., Mentuhotep II became the first pharaoh to consolidate control over the entire country of Egypt. This began the time period known as the Middle Kingdom, which lasted from about 2050 to 1650 B.C.E.

It was during this time that Anubis became overshadowed as god of the Underworld by Osiris. Osiris was very popular and familiar among the different regions and belief systems, and Egyptian mythology evolved such that new roles were carved out for both Anubis and Osiris.

Like many Egyptian gods and goddesses, Anubis was usually portrayed in either a pure animal form or as a human with an animal head.

In the case of Anubis, the animal was a jackal. Anubis was likely portrayed as a jackal as these animals were often seen skirting cemeteries and digging up graves, and were therefore associated with death.

In pure jackal form, Anubis was often portrayed laying on the ground in a manner similar to the Sphinx. In these instances, he was laying down but his head was up and alert and his paws were outstretched in front of him. 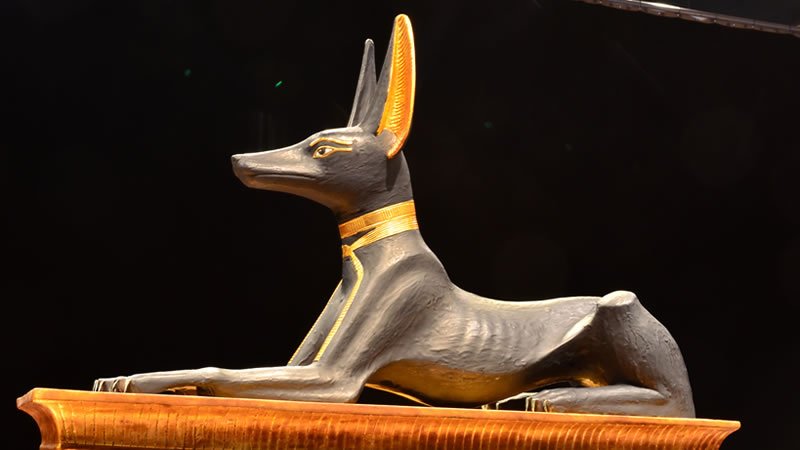 An article by Dr. Moya Smith of the Western Australia Museum notes that, in jackal form, Anubis would often have a sash around his neck called a sa.1 The article states that the sa represented protection, and that pharaohs and kings would wear them around their waists.

Anubis is often pictured with the flail and ankh when portrayed as a human with the head of a jackal. His black jackal head has a pointed muzzle and long, alert ears.

He can also be seen in many hieroglyphs and paintings wearing the wesekh, the broad rounded collar that was worn by the pharaohs. Sometimes he is seen wearing other pharaonic head wear such as the Nemes headdress, particularly in modern renderings of the deity.

Early Egyptian mythology described Anubis as the son of Ra.

Stories from the Middle and New Kingdom depicted him as the illegitimate son of Osiris and his sister Nephthys, a protective goddess of the dead.

Legend held that Nephthys abandoned Anubis for fear of Set, god of evil, to whom she was sister-wife. As a result, Anubis was raised by their sister Isis. Anubis and his female counterpart Anput had a daughter, Kebechet, who was the goddess of purification.

The most common symbol attributed to Anubis is the canine. In Egyptian hieroglyphs, he is usually depicted as a canine (jackal or dog) or as a man with the head of a canine. He is also often pictured in black, a symbol of death, and the color of a corpse after it is embalmed.

He was also, at times, pictured carrying a flail or crook and flail. A crook is a stick with a hook at the end of it, and a flail is a stick with long tassels or ropes that hung from one end. Another item he is sometimes seen carrying is an ankh – an Egyptian symbol that meant life or immortality.

As noted above, Anubis was the predominant god of the Underworld in early Egyptian mythology. In the Pyramid Texts of the Old Kingdom – the oldest religious texts in the world – he can be seen participating in different rituals such as the very ancient Opening of the Mouth Ceremony. 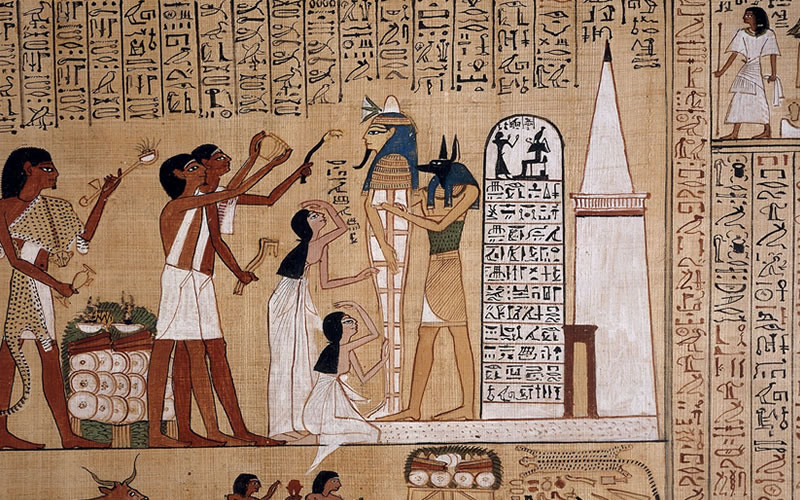 Anubis and the Opening of the Mouth Ceremony

One of Anubis’ most important functions became weighing the hearts of the deceased on a set of scales against the goddess Ma’at’s Feather of Truth. A portrayal of this can be found in the Book of the Dead, an Egyptian funerary text from the New Kingdom (circa 1550 B.C.E.).

During this particular ceremony, if the deceased’s heart weighed less than or equal to Ma’at’s Feather, that person’s soul was able to cross over to be with Osiris. If the heart weighed more than the feather, it meant that it was a corrupted heart, heavy from wrongdoing and evil. The heart would be given to and devoured by Amut the Destroyer, a female demon who had a crocodile head, a lion’s body and hippo legs.

Anubis’ main center of worship was Cynopolis. The Latin word cyno is derived from the ancient Greek word κύων, which means dog or members that resemble dogs. Cynopolis was destroyed during a civil war called the War of the High Priest under the reign of Ramesses XI . Today, the city of Al Qeis is located where Cynopolis once stood.

A separate city, called Lycopolis, was primarily built to worship the Egyptian deity Wepwawet. Wepwawet was portrayed as a wolf or a jackal, but had blue or grey fur instead of black like Anubis.

Although Anubis’ main worship center was at Cynopolis, he was worshiped throughout Egypt and was an extremely popular deity. Many Egyptians would mummify dogs in order to worship and pay respects to him. Some priests would even create fake mummified dogs to be worshiped out of sticks, random bones and other objects.

Anubis was so popular that nearly 8 Million dogs and puppies were buried in catacombs near a temple dedicated to Anubis, in a place called Saqqara. Saqqara is a massive burial complex located in northern Egypt along the Nile River, approximately 20 miles south of Cairo. It is believed that here, Egyptians would purchase dead dogs or puppies from merchants and then dedicate them to Anubis. 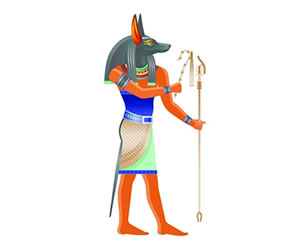