Bes is the Egyptian god of war and domestic protection. He was also worshiped as a god of fertility, music, dancing and gaiety. He was predominantly viewed as protector of households, especially of mothers and children during childbirth. In this manner he held a very similar role to the goddess Bastet. Although he is viewed as a minor god of ancient Egypt, Bes is a complex deity with many aspects.

Bes most likely already existed in the Old Kingdom of Egypt but only became prominent during the New Kingdom. Some theories have it that he was originally from sub-saharan Africa, and did not originate in Egypt. In his earliest inception, he was said to be a lion.

He is sometimes depicted as a bearded dwarf with an ugly appearance intended to scare evil spirits away. In most images of him, he sticks out his tongue and shakes a rattle. He also has prominent genitals, bow legs, and a tail. On his head, he often wears a crown or plumed headdress. Despite his scary appearance, the people of Egypt were not afraid of Bes.

Mention is made of two wives belonging to Bes. The one was Taweret and the other Beset. Not much is known about other family relationships, including who his parents were.

The Sa symbol, which means “protection of young life,” is associated with Bes and his wife Taweret. Because of his origin, he is also affiliated with lions.

He originally protected the pharaoh, but quickly became popular among ordinary Egyptians who put his statue up at their homes to scare away demons. As household protector, he would fight off dangerous animals, such as snakes and scorpions.

Bes was often associated with Horus the child. Being the god of childbirth who protected the birthroom and the mother, he is even said to have entertained the newborn with music and dancing, making the baby smile. Due to his stature as protector of homes and childbirth, a picture of him was present in many birthhouses.

During the time of his worship, Bes was associated with more prominent Egyptian gods such as Amun and Hathor. The latter was the goddess of childbirth, dancing and music. In later historical periods, Bes became known and worshipped among the Phoenicians and the Cypriots. Images of him were also found during the Persian Empire, when he gradually came to be depicted in Persian clothes and headdresses. 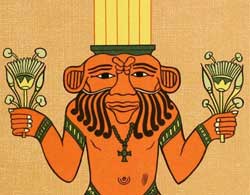