Geb is the Egyptian god of the Earth. He is also a god of fertility and farming, and is associated with birth, death and the life cycle in Egyptian mythology. Geb is also sometimes referred to as “seb” or “keb”. There is some debate over the proper pronunciation and spelling of his name, as well as when different variants of his name were used in ancient Egypt.

The oldest known depiction of Geb is found in Heliopolis, and is dated to approximately 2600 B.C.E.

The Great Ennead was formed as early as 2600 – 2500 B.C.E. The other eight members of this particular grouping included Atum, Shu, Tefnut, Nut, Osiris, Isis, Seth and Nephthys.

In hieroglyphic writings, Geb was usually portrayed in a purely human form. In many of these portrayals, he can be seen covered with plants or vegetation to symbolize fertility in farming. He was sometimes depicted as having green hair or skin, and also at times shown with a goose sitting on top of his head.

He was also shown lying on the ground underneath Nut who was arched high above and covered with stars, or underneath Shu who was between him and Nut.

One example of this is found on the Papyrus of Tentamun, and can be found in other papyrus writings as well. Geb can also at times be found in scenes in a zoomorphic or hybrid form, such as having a snake’s head and human body.

His parents were Tefnut, known as the moisture goddess, and Shu, the god of sunlight, wind and air. Geb also had a twin sister, Nut, who was goddess of the sky.

Geb and Nut produced four offspring – Seth, god of storms and disorder, and Osiris, Isis, and Nephthys. At times they were said to have a fifth child, Horus.

According to the Heliopolitan Ennead system, Geb had an important place in the creation story. Some time after he and his sister were born, they began to have a relationship that was incestual. Their father, Shu, was not pleased with them and separated them. Shu held Nut up above his head in the sky, and kept Geb on the earth below him.

In the space between them, Shu created and gave life to nature.1 Even though they were separated, the siblings still had four (or five) children together. Narratives between cities and regions may have differed from this, but many of them had the father Shu holding or supporting Nut and standing on top of Geb.

As a result, Geb became very important to matters relating to the earth. It was said that earthquakes were the result of his laughter. Because of this relation to the earth, he became an important god in farming.

There was not a major cult center associated with Geb, but the god did have a high number of appearances in hieroglyphics throughout Egyptian temples, tombs and pyramids. Heliopolis, located near Cairo, is one such place where Geb frequently appears.2 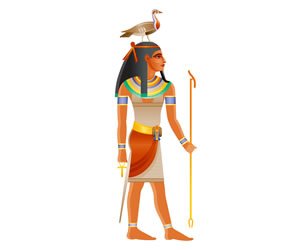