Nut is the Egyptian goddess of the sky. She is a member of the Ennead, the nine original Egyptian gods and goddesses of Heliopolis, which was a city near Cairo and the birthplace of the gods.

She is the daughter of Shu and Tefnut, and both sister and wife to Geb, the earth god.

Egyptian mythology said that Nut and Geb were inseparable, which left no room for creation by Atum Ra, the creator god. Atum Ra and Shu, who were jealous of the closeness between Nut and Geb, did not want them to have children. Shu separated them by lifting Nut up. She continued to form the sky, while Geb remained beneath her to form the earth.

In another myth featuring Ra, Nut is referred to as his mother. The Pyramid Texts reveal that her body becomes a pathway for the sun. Ra passes over it during the day before Nut swallows him at night. Then, a new day starts when she gives birth to him again in the morning.

Ra issued a decree that Nut “shall not give birth on any day of the year.” She conspired with Thoth, the god of wisdom, who won five extra days from the moon for her to bear five children. She gave birth to Osiris, ruler of the gods; Horus the Elder, god of war; Set, god of evil; Isis, goddess of magic; and Nephthys, goddess of water. This is the story of how a year came to have 365 days.

Nut is most commonly depicted as a naked woman with a water pot on her head; the pot is also the hieroglyph for her name. Sometimes she is pictured in an arch, with her hands and feet on the ground, touching it on the earth’s four cardinal points and serving as the pillars of the sky. Often, Shu is seen holding her as Geb rests propped up by his elbow on the earth.

Nut is often portrayed holding the key of life, called the ankh. She may also be seen holding the was scepter in depictions of her. This scepter is a long staff with an animal head on top and is a symbol of authority and divine power.

Nut is sometimes depicted as a cow with eyes representing the sun and the moon, or a giant suckling sow whose piglets were the stars. The sycamore tree, representing protection and eternity, is another symbol associated with Nut.

Nut was also a protector goddess, namely a protector of the dead. The Pyramid Texts contain many prayers to Nut to ask for protection for those who have died.

A picture of Nut was often painted on the inside of a coffin (sarcophagus) to protect the dead. Sometimes she is pictured with protective wings, and other times the symbol of the ladder was used to depict her. Many examples of these can be seen at the Cairo Museum.

The chief cult center for Nut was at Heliopolis, but she was also worshiped as a healing goddess in Memphis at a shrine called the House of Nut. No known temples were built exclusively for her. 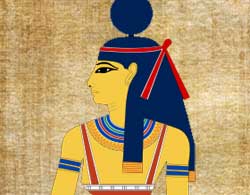