Mut is the Egyptian goddess of Creation. She is a mother goddess who came to prominence during the New Kingdom (c. 1550 – c. 1070 BC) as a result of her relationship with the god Amun. She is often represented as a vulture or a woman that at times may have wings.

Later, as she took on the attributes of other Egyptian goddesses, she was also depicted as a woman with a lion’s head. Sometimes she wore the royal crowns of Upper and Lower Egypt and sometimes the vulture headdress of the queens of the New Kingdom.

Mut is believed to have originated as a local goddess in the Nile River delta, after which she replaced and assimilated many other Egyptian goddesses over the course of millennia. She was originally linked to the primeval waters of the universe, from which all things were born. Her identity as mother of the cosmos gave her aspects of a creator goddess.

Mut became a national goddess when Amun, king of the gods and god of the wind, became patron of Thebes during the Eleventh Dynasty around the 21st century B.C. She took the place of Amun’s original wife Amaunet, the invisible goddess. With Amun being the god of the pharaohs, she became their mother and was closely associated with the queens.

After Amun’s authority waned and he merged with the son god Ra, Mut was assimilated into Hathor, the mother of Horus, who was also identified as Ra’s wife. She was later absorbed into the Heliopolitan Ennead.

Myth has it that as the great mother from who everyone was brought forth, Mut had no parents. In some depictions of her she also has male parts. Although she was the mother goddess, she did not give birth to her own children. Instead, she first adopted Menthu, the war god, and then Khonsu, the moon god.

Mut, Amun, and their son Khonsu were worshiped as the Triad of Waset. Waset was the ancient Egyptian name for Thebes, and became the capital of the pharaohs during the New Kingdom. A large temple complex, commonly referred to as the Temple of Karnak, was constructed in Waset (Thebes) to worship the triad.

Inside the Mut Precinct are six temples. These include Mut Temple Proper, the Contra Temple, and temples labeled as A, B, C and D. All six of these temples are surrounded by a wall made of mud and mud-brick.1

The Mut Temple Proper is surrounded by a lake in the shape of a horseshoe. During the festival of Mut, a boat with a statue of the goddess was sailed around the lake. Interior reliefs from the temple in Karnak show evidence of daily devotions by the queen and her priestesses. No other examples exist of exclusively female worship in ancient Egypt.

Evidence exists that it was the pharaohs Hatshepsut and Thothmose III who were responsible for the earliest versions of the Mut Precinct. Excavations at the precinct first led archeologists to believe that the temples were built by Amenhotep III because of the presence of several statues of the goddess Sekhmet bearing his name. However, it is now believed that they were brought here after his death at a time when Mut and Sekhmet were closely associated.

Over the centuries, more additions and improvements to the Mut temple precinct were done by pharaohs such as Rameses II, Rameses III, and Taharqa, who was also king of the Kush. 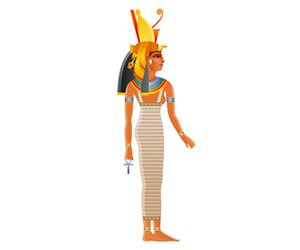