Ix Chel is the Mayan goddess of the Moon, fertility, weaving and waters. At times, she is also described as a war goddess.

The Mayan pantheon consisted of many different gods with very specific roles. Some of these gods, however, had incredibly wide portfolios. One of these was the goddess Ix Chel, who played a number of important parts and roles in the Mayan world. She had a significant role in childbirth, was the equivalent of a midwife or even a physician goddess, and also had an importance in “weaving” the universe.

Along with having various roles, Ix Chel had multiple descriptions, or profiles.

Ix Chel was capable of taking several forms, or aspects. It is quite possible that some of these aspects of Ix Chel are actually depictions of other, forgotten goddesses. With that said, there are two major aspects of Ix Chel that are relatively agreed upon.

Ix Chel was primarily depicted as an older woman who wore a serpent crown and who dressed in traditional Mayan garb. In this iteration, Ix Chel may have, at times, worn a skirt that had crossed bones on her dress. She also may have, at various times, had claws on her hands and her feet. She was commonly shown with either a large earthen vessel or with a gaping, frightening mouth.

Sometimes, Ix Chel was depicted as a young woman. In this version, she was generally attractive, and sometimes had a beak on her upper lip. She also tended to wear some sort of headdress. This younger iteration of Ix Chel was usually presented in a much friendlier manner than her elder counterpart.

The most common symbol associated with Ix Chel is the Moon. There is a great deal of debate over which phase of the moon she should be associated with. Some scholars argue that all phases of the moon fell under her domain, while others believe only the waning moon did.

Ix Chel was also associated with an upside-down jar, which might have represented flooding or possibly abundance. She was also frequently associated with weaving tools in her role as a major figure in Mayan cosmology.

Lastly, she had a tendency to be affiliated with rainbows, which were a negative omen in the Mayan world.

There are several other symbols that were associated with Ix Chel, but there is debate as to which symbols actually belonged to this goddess and which symbols might have belonged to other related goddesses. Some of thes other minor associations included crossed bones, headdresses, and sometimes even spiders. The latter symbols are less certain than the former.

In her role as a fertility goddess, she had power over rain and waters. She was generally considered to have the ability to cause great floods. Whether this meant she had responsibility for catastrophes or for the changing of the seasons is also a matter of debate. Regardless of the exact role of her waters, she seemed to control them through the upside-down jar that she carried.

In Ix Chel’s role as a weaver, she used a special spindle that also served as the center of the universe. Her responsibility for this spindle gave her a great deal of power, though her exact role in ensuring that the universe continued to function is unclear.

As there were a host of different potential myths that may or may not have involved Ix Chel, her family could range fairly widely.

The biggest place in which her family diverged was in the matter of her husband. In some Mayan tales she’s married to Voltan/Votan, and in others she is married to Itzamna.

In the myths in which she’s married to Itzamna, she has thirteen sons. Four of these sons, the Bacabs, are the deities that hold up the sky in Mayan mythology. To make things even more complicated, it should be noted that the four Bacabs may have also been only a single son of Ix Chel and Itzamna known as Bacab.

Ix Chel also had some kind of connection with Hun Hunahpu, the Maize god. Though it’s not known if Hun Hunahpu was one of her thirteen sons, she did aid him in being reborn and also assisted with the birth of his sons.

A great deal of the worship of Ix Chel happened at Cozumel. Mayan women who wanted to ensure that their upcoming marriages would be successful would make a pilgrimage to Cozumel and speak to an oracle who was hidden in a statue there. There seems to have been a related island called Isla Mujeres where women would bring, leave, or make idols of Ix Chel.

At Tixchel, there were tales of women being sacrificed to a goddess who was most likely Ix Chel. The best evidence of this practice was the fact that the village itself was named for the goddess and that she seems to have been a primary goddess that was worshiped in the region.

There was also a Feast of Ix Chel, in which both shamans and physicians would bring out bundles of medical supplies and divination supplies. Ix Chel was frequently invoked during and after childbirth, specifically in her role as a midwife. 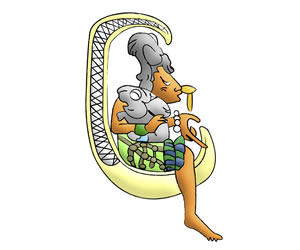