Thoth is the Egyptian god of Knowledge. He was widely worshiped as inventor of the written word and credited with the creation of different branches of knowledge.

Thoth is a central figure in ancient Egyptian religion, filling various important roles in the mythological world. However, the worship of Thoth lasted only until the dynastic era. Regardless, the Egyptians and Greeks alike credit him as the inventor of all knowledge.

Egyptian myth told that Thoth was self-created, while at least two alternate stories claim he was either born from the sun god Ra’s lips or from the war god Set’s forehead after Set swallowed the semen of his brother Horus.

He is commonly depicted in human form with the head of an Ibis, a sacred bird associated with wisdom. The name Thoth is the Greek version of the Egyptian name Djehuti, which means “He Who is Like the Ibis.” Sometimes he is pictured holding an ankh, a famous hieroglyph resembling a cross, and scepter; other times, he is pictured holding a scribe’s palette and stylus. He is also seen wearing the Atef crown usually worn by Osiris. When he took the form of A’an, god of equilibrium, he was depicted with the head of a baboon.

Considered to be the author of the Book of the Dead, Thoth also acted as scribe to the gods and of the underworld. In this capacity, he stood by during the weighing of the hearts of deceased persons. Hearts lighter or equal to the weight of a feather could move on to a heavenly existence. Thoth’s just decisions in these and other matters made him a respected judge.

Appropriately, one epithet given to Thoth is “The Reckoner of Time and of Seasons.” He possesses the gift of measuring and recording time. In one popular myth, he added an extra five days to add to the 360 day calendar. This was to enable Nut, the sky goddess, to have a child on each of these days after Ra issued a decree that she was to have no children on any day of the original year.

Thoth was first worshiped as a moon god. The moon’s cycles played an important role in Egyptian life. The crescent moon resembled an ibis, the bird associated with Thoth.

Thoth’s main temple is at Khmun. Here he led the Ogdoad pantheon, the four gods and four goddesses who made up the principal deities before creation. He has shrines in numerous other cities.

A festival of Thoth was held at Khmun, where his worshipers buried mummified baboons and ibises as votive offerings. Evidence of these have been found by archaeologists at the necropolis of Tuna el-Gebel. 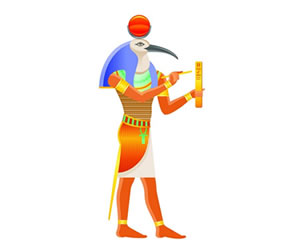