Isis is the Egyptian goddess of magical healing. She is also a goddess of childbirth, fertility and motherhood, and represented motherly virtues. Common people related to her in ancient Egypt, but she was also associated with royalty as her name actually means “throne”. As can be seen, Isis held many different roles in Egyptian mythology and religion. She was

Isis was one of the oldest and most important of ancient Egypt’s gods and goddesses. Her popularity reached as far as Europe during the time of the Roman Empire, and she is still worshiped by pagans today.

Her name appears for the first time in the Fifth Dynasty (c. 2498 – c. 2345 BC) in the sun temple of King Niuserre. The first temple dedicated specifically to her was built in the Thirtieth Dynasty (380 – 343 BC) by King Nectanebo II.

What makes Isis so important is that, as a member of the Heliopolitan Ennead, she was closely associated with other prominent ancient Egyptian gods and goddesses. She was the daughter of Geb, the Earth god, and Nut, the sky goddess. Her siblings included Osiris, Set and Nephthys.

As the mother of Horus, the god of kings, Isis was represented as the deceased pharaoh’s wife during the Old Kingdom. Her name appears in the Pyramid Texts more than eighty times.

One of the best known images of Isis is as the mother of Horus. She was often depicted with Horus the Child on her lap, supposedly nursing him. These images are said, by some, to have influenced early Christian artwork of the Virgin Mary and the baby Jesus.

Some of the earliest art works of Isis show her wearing a long sheath dress with a throne headdress. In other depictions, she has the cow’s horns and sun disk of Hathor on her head.

While Isis was mostly depicted as a woman with either a throne or cow’s horns and sun disc on her head, she was occasionally also presented as a winged goddess, sow, a bird, a cobra, or a scorpion. Sometimes she was even depicted as a kite hovering over the body of Osiris.

Sirius, the brightest star in the night sky, is associated with Isis. Its appearance signaled the coming of a new year, with Isis likewise symbolizing rebirth.

Isis’s principal aspect was that of magician. Her magical prowess was far stronger than that of any other god or goddess.

After Alexander the Great conquered Egypt, Isis became known as the Queen of Heaven and was equated with Greek goddesses such as Aphrodite, Demeter, and Astarte.

The myth of Isis is one of the most popular in ancient Egyptian mythology. In it, Isis was a good queen to Osiris and an example to the women of Egypt. Set became jealous and killed Osiris by trapping him in a lead coated chest and throwing him into the Nile. Isis found Osiris after a long search, but Set hacked the body into pieces and scattered it all over Egypt.

With the help of Nephthys, Isis put her husband’s body back together, except for his penis that remained missing. However, she became pregnant using her magical powers and gave birth to Horus nine months later.

It is because of this popular myth that she is often referred to as a goddess of magical healing. She was, however, far more than that to the Egyptian people and to the people that have worshiped her over the centuries and even today. 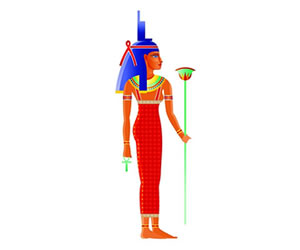